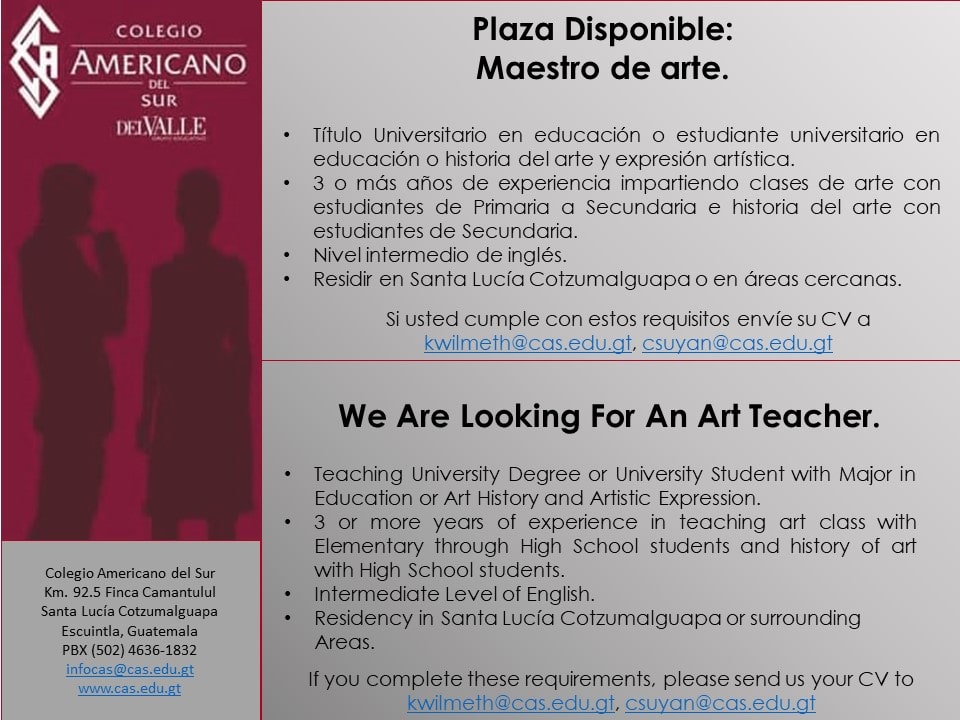 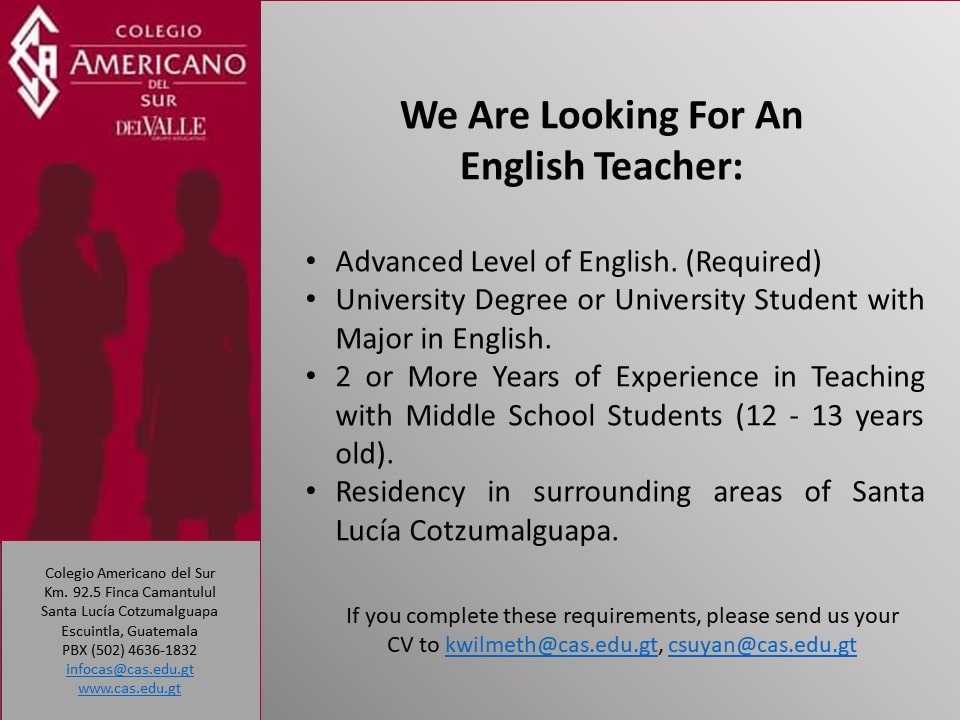 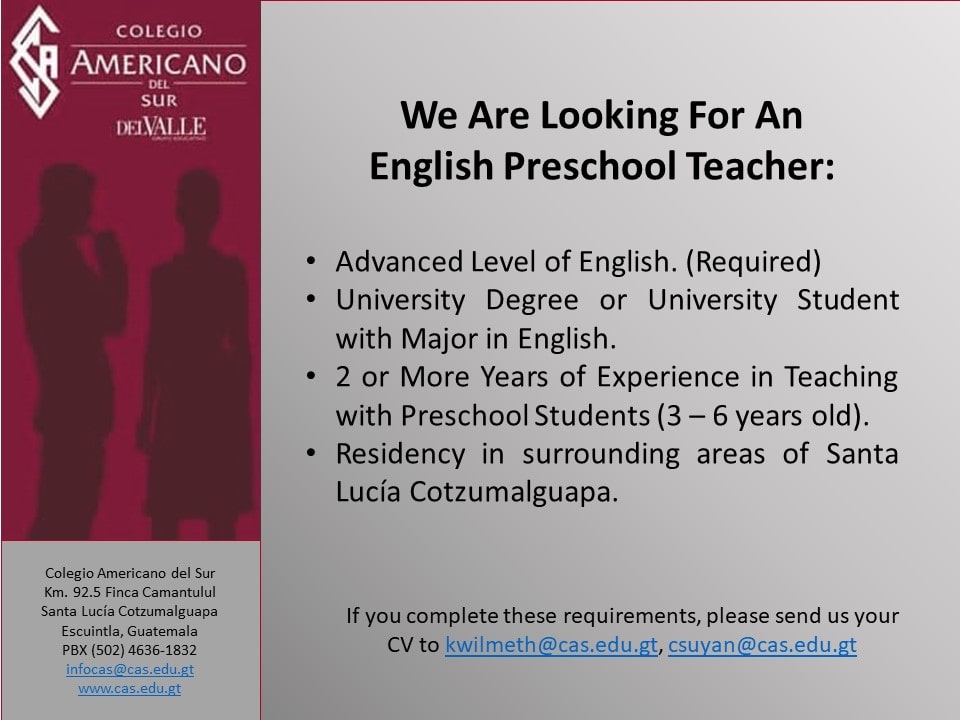 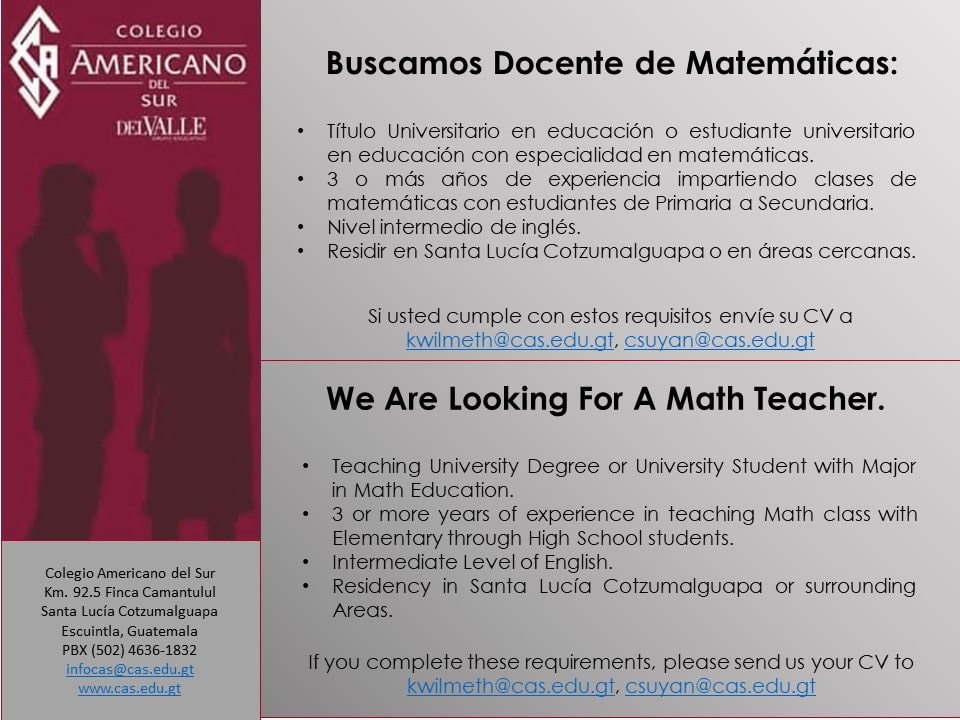 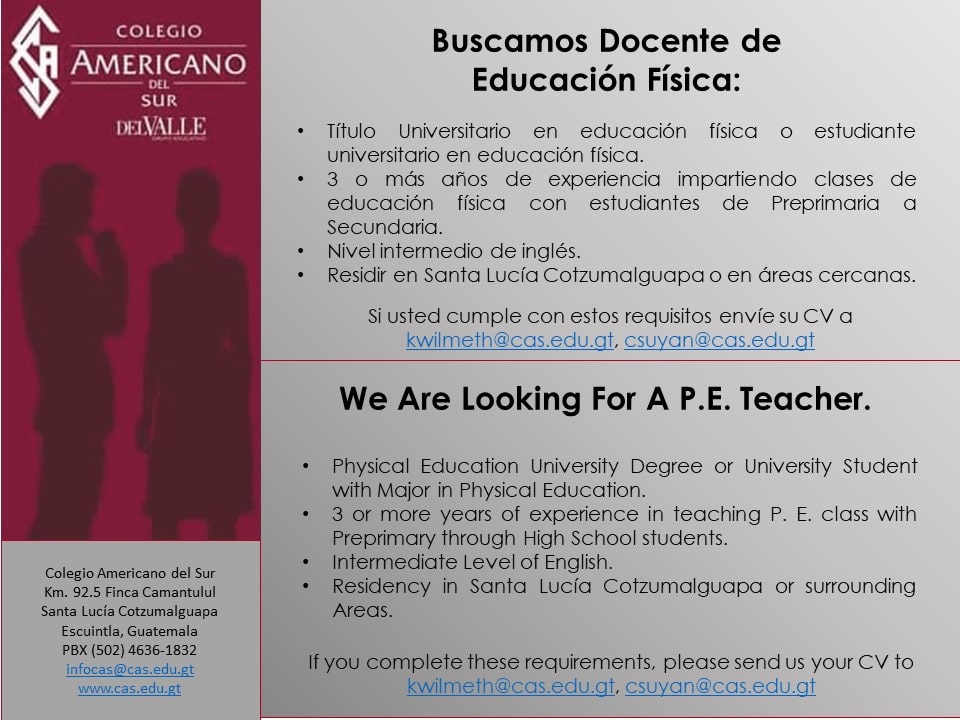 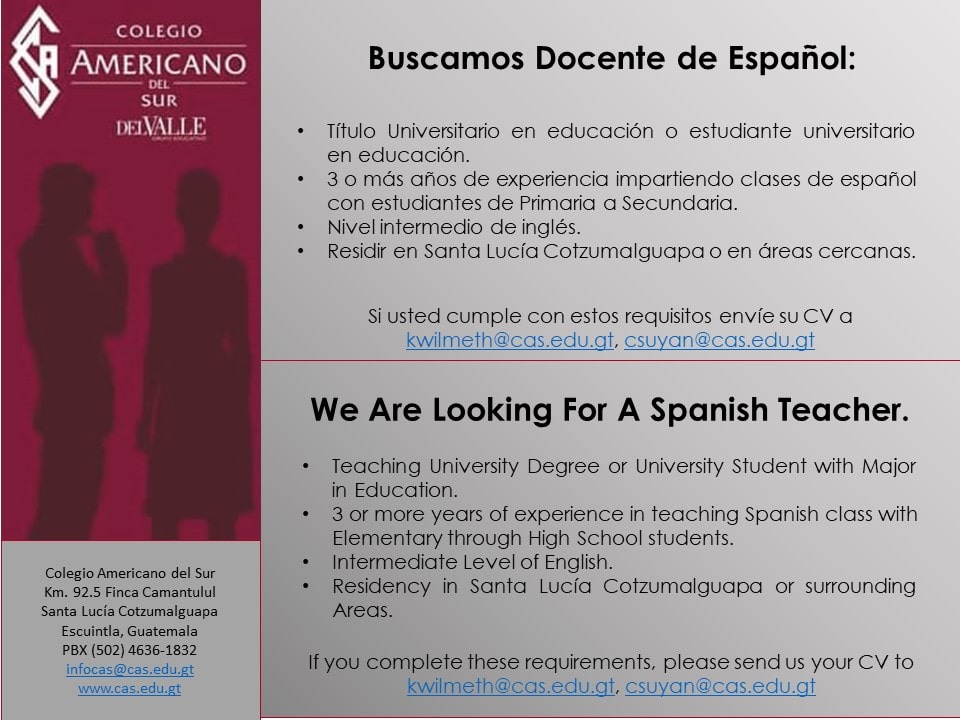 My Experience at CAS and Guatemala
VER
As a firm believer in the changes on a person’s life from a quality education, I thoroughly enjoy my job at CAS as the Director of Curriculum and Instruction. Not only does the position allow me to support and work with the amazing teachers at CAS, but also I am able to implement curricular changes that enrich and innovate student learning.

I started at CAS in 2016 after completing my Master’s in International Educational Development at the University of Pennsylvania. Before that, I had worked for two years in South Korea as an English teacher before going to Guatemala City in 2013. It was while working at UPAVIM (a woman’s cooperative with health and educational programs) as the After School Program Coordinator that I realized it was not teaching that was my passion, but helping students, through their teachers and curricula, to receive a high quality education that not only teaches them, but inspires and challenges them. I worked and lived in an area of Guatemala City that most Guatemalans avoid at all costs because it is a gang-controlled area with frequent violence and extortion. Because of this factor, the local schools have challenges getting teachers to work there, as well as finding teachers with experience and education. While I always have and will enjoy teaching, I decided to pursue a Master’s that would result in a larger impact by helping the teachers to reach their own potential, and in turn, give opportunities for the students to reach their own potential.

Returning to Guatemala felt like a kind of homecoming and also it was a whole new challenge to work at CAS. I was plunged into new things I had never done, but I was able to take my own educational experiences to strategize ways for making improvement at CAS. One of my favorite parts of the job is when teachers email me or stop in for advice on their teaching. I love to see the innovating things teachers want to try and I hope that with support, they enrich their students’ experiences, as well as their own.
Adicional

Teaching in a foreign country is a great way to work as well as be a tourist. I have had several opportunities to travel on the weekends to popular tourist spots such as Antigua, Panajachel, and Pacaya Volcano. I was a Spanish major in college, and working at CAS helps me to continue improving my Spanish and becoming more fluent. Overall, Colegio Americano del Sur is a great opportunity for anyone looking for a job that is full of adventure, culture, and challenges.

My Experience at CAS and Guatemala
VER
As an educator, my whole working experience has been focused on children, therefore this year has reassured me the love and dedication that every little human needs.

I started in CAS after a few events in my life, first of all, I completed my Masters Degree in Madrid, Spain. Working back in Mexico, my home town, as a Speech and Language Therapist helped me realize the passion I have for the human development and everything it involves. Later on, I got married , that is what brought me here; I am happily married to a Chapín, and important to mention, he is an ex alumni of CAS. As a newlywed I arrived to Guatemala in 2017 and started working in CAS. I must admit that at first I felt a cultural difference, but it was soon that everyone started to treat me like I was no foreigner. I have found a second home in Guatemala where the people are loving, caring and risk takers. That was my first impression, then it was reaffirmed by every single student that I had in class; risk takers, fun, people who love challenge, who are kind, and have a goal to meet every day.

All of the above is what has motivated me in contributing to CAS as far as my abilities may reach and doing it with the passion, enlightenment but above all dedication. Like Nelson Mandela said: “Education is the most powerful weapon you can use to change the world”- At least we are trying, working, and witnessing results, day after day here in CAS. mariamar
Adicional

In addition to having wonderful students, I have had the opportunity to work with some excellent colleagues. Guatemalans, in general, are a very friendly and amicable people, but my co-workers here at CAS have been especially accommodating, welcoming me as an integral member of their community. I was also given plenty of freedom to experiment in the classroom, which was refreshing. When I leave CAS to write the next chapter in my life, saying good-bye to the friends I have made here―students, parents, and colleagues―will be the most difficult part. Years ago, I remember writing a report about Guatemala in elementary school. Something about the country piqued my interest; maybe it was the bananas, who really knows. What I vaguely recall mentioning was its natural beauty and geographic diversity. After living here for three years, however, I am sure that report did not do it justice. Guatemala is a traveler’s playground, offering myriad opportunities to explore its highlands, lakes, valleys, and coasts. I have traveled to several countries in the world, and though Guatemala has its share of political and social strife, I would contend that its stunning geographical beauty and cultural diversity could compete with most countries in the world. Within a two-hour drive, you can go from walking amidst the cobblestone streets of a colonial town to looking out in wonderment at breathtaking volcanoes looming over indescribable Lake Atitlan. Moreover, only in Guatemala can you find an indigenous culture clinging to their rich Mayan past, a Garifuna culture adding touches of Africa, Arawak, and the Caribbean, and a Ladino culture whose past is steeped in Spanish colonialism. Guatemala has had its own melting pot of sorts, and I find that truly fascinating. So much so, in fact, that I have made it my home for the past three years.